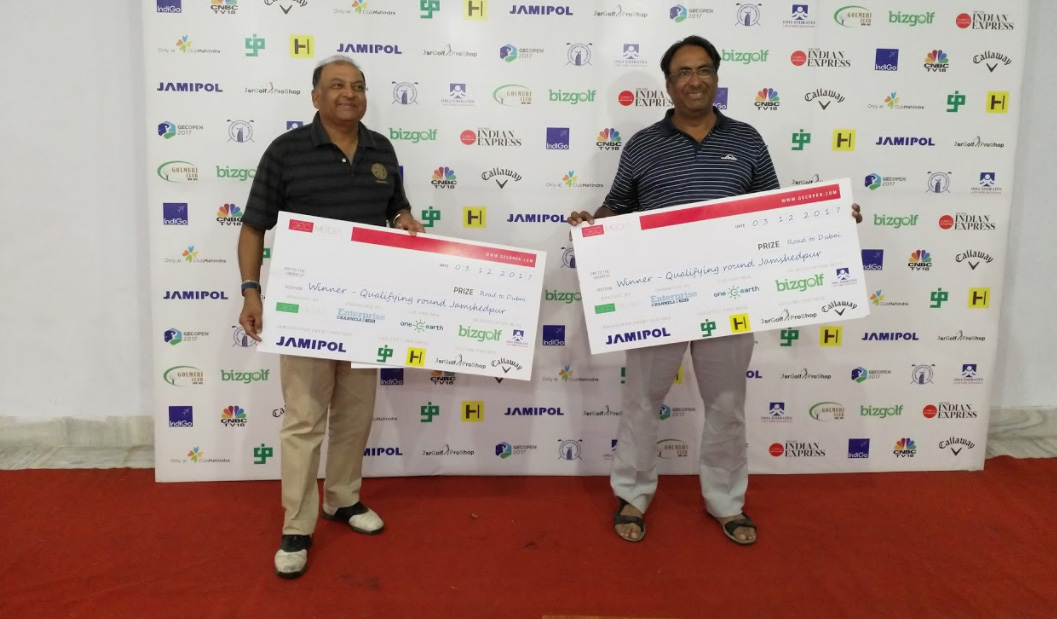 The steel city of Jamshedpur recently hosted the final qualifying round of GEC Open’s Indian swing at the par 72 championship golf course of Golmuri Golf Club. In an invitational tournament, the crème de la crème of Jamshedpur golfing fraternity came out for a fun filled yet competitive golf day. The celebrity quotient of the day was upped by the participation from Shri. Arjun Munda (Ex CM Jharkhand). The tournament was played in stroke play format with the top best Nett scores to qualify for the GEC Open World Final.

Independent businessmen Vipul Amin and Rishad Chinoy, a Tata Group employee returned the best scores in their respective categories to be crowned champions in a hotly contested tournament. The Duo will now join other India winners and present the Indian challenge at the World Final – Dubai Corporate Golf World Cup 2017.

The Dubai Corporate Golf World Cup is set to be played at Jumeirah Golf Estates – Earth Course and Emirates Golf Club – Majlis Course over two days on December 13-14 where national champions from 18 countries will vie for the coveted championship and bragging rights as global champion.

“I am delighted to have won this tournament. Me and Rishad are going to work hard for the next few days and bring our best form to the world championships. It was a very well organized event and we congratulate the GEC Group to have brought this event to Jamshedpur. Can’t wait to compete in Dubai and play at two fantastic courses.”, added an elated Vipul Amin.

Jamshedpur is well known as the Steel City of India. Part of the Chota Nagpur plateau, Jamshedpur is located in Jharkhand state, amid hills and is bordered by the Dalma hills from west to east and is covered with dense forests. Such idyllic surroundings were the inspiration for developing the region with golf courses. The Tata group promoted this sport actively and soon Jamshedpur became home to two golf courses–the Beldih Golf Course and the Golmuri Golf Course.

Together, both these lush, courses hold the annual Tata Open Golf Tournament under the auspices of the Professional Golf Tour of India. It is also plays host to the Steel City Golf tournament in which local players and players from other clubs are invited to play.

Tushar Sahoo, Managing Director, GEC Open, said: “It was our debut edition in Jamshedpur and we absolutely elated with the response. Congratulations to Vipul and Rishad who played the best golf of the day. We look forward to hosting you at the World Final.  We had more number of qualifiers in India than any other country on our global golf tour. All tournaments were very well received by the Indian golf fraternity and we saw massive participation in all five legs. With the support from local sponsors and partners, we hope to even expand it to more cities next year.

GEC Open made its debut in 2014 with just one golf round in Dubai. In 2015 and 2016, the event grew in popularity and was played in six and eight countries respectively connecting over 1100 corporates in the GEC ecosystem. Since then, GEC Open has matured into a global platform for networking, forging everlasting friendships and business relations. The 2017 edition is scheduled to hold 29 golf rounds in 18 countries engaging over 2400 corporate leaders under the aegis of 800+ global organisations!

GEC Open, in association with OMA Emirates, breathed a new wave of change in which this elite sport was played. With a lot of downtime to talk and accessibility for all ages, it’s a unique blend of sports and networking. GEC brings together leading global organisations and executives on a common platform through golf. GEC works to improve the lives of others through charitable causes while growing the bond & strength of business between corporate leaders.