The Future IT Summit 2016, organized by Enterprise Channels MEA and brought to you by Global Enterprise Connect, concluded on a high note at the Armani Hotel, Burj Khalifa. The two-day summit stood witness to some amazing presentations and discussions on Cloud and IoT by the keynote speakers and panelists as they engaged in some ice breaking sessions throughout the 2 days. The event hosted the top government organizations, ministries, business conglomerates and leading organizations from various verticals in the 2 days.

Setting a very non-conventional tone, the summit presented the audience the Future IT landscape of GCC countries with some thought provoking and technology rich presentations.

The first Future IT Summit was held in The Address Hotel, Downtown Dubai on 16th March 2015, it analyzed the hybrid cloud market and received a great response from the market and was applauded for exploring multiple layers of hybrid cloud along with top experts from the industry. The success of the first year led to the Future IT Summit to be held again for two days. 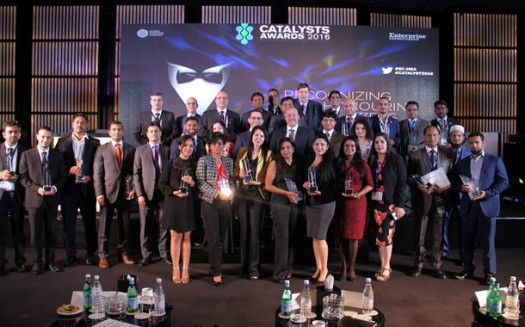 In conjunction with the summit, the most awaited Catalyst Awards was held on the 7th April 2016, Enterprise Channels MEA values individuals and believe in awarding their capabilities and dedication to the efforts they put in project after project. Catalyst Awards was pioneered by Enterprise Channels MEA and which is a novel and one of its kind award to honor individuals.

Tushar Sahoo, Managing Director, Enterprise Channels MEA said, “We are delighted for the response we received for Future IT Summit 2016. We had a fantastic array of expert and eminent speakers and experienced panelists along with enthusiastic delegates. Such events make us more confident and clear about the level of trust the IT market has in us, aim to bring to limelight various aspects of ICT and scrutinize them with professionals. I would say Future IT Summit is a good learning platform and Catalyst Awards is a way to award talents who explore and put to use IT solutions in the best of their organization’s interest.”

Mr Ronak Samantaray, Director of Marketing, Enterprise Channels MEA said, “This is indeed an exciting event for us and we always look forward to bring the best talents from the industry and put forth discussions that bring value to the IT fraternity, the end users and the region collectively. We are thankful to everyone who was a part of the event and we look forward to our other events like GEC open golf tournament and GEC awards too. I would like to thank our sponsors, speakers and participants for making this event a big success.”