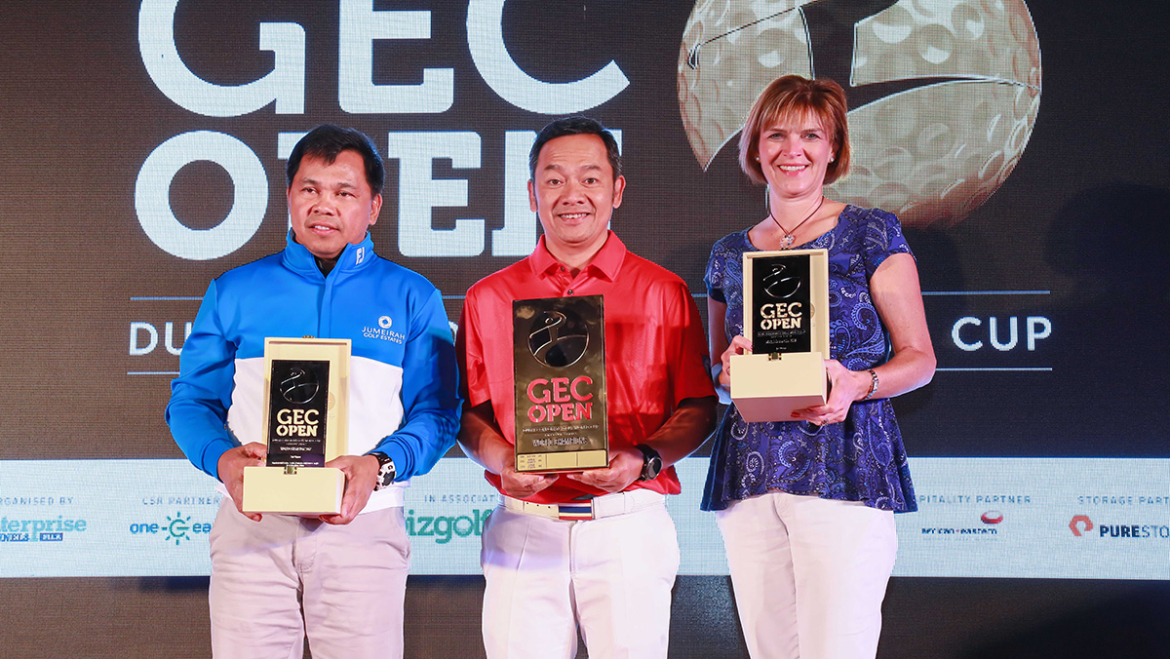 After 26 gruelling golf rounds across 18 countries in the eastern hemisphere, 60 top amateurs and industry stalwarts made it to the World Final of GEC Open in Dubai.

The world final – Dubai Corporate Golf World Cup was held over two days at Jumeirah Golf Estates – Earth Course and Emirates Golf Club – Majlis Course. Testing their mettle at two very different layouts that are home to few of the most reputed professional tournaments on the European Tour, the amateurs displayed grit and determination in their endeavour for the coveted trophy.

Round one at the Jumeirah Golf Estates- Earth Course

The format of the game was individual Stableford with full handicap allowance with the total score of two days counting towards the final standings in a single best Nett category.

As the curtain drew on the first day, playing off scratch, Frenchmen Christophe Callaou carded 35 Stableford points. Christophe had qualified from the national qualifying round at Heritage GC in Mauritius in October. Susan Drummond scored the equal number points but was edged out for top place owing to a higher handicap to Christophe at 5.7 index. Susan who hails from Scotland, booked her berth in the world final at Dreamland Golf Club in Baku, Azerbaijan.

Indian national Hassanali Bulsara, who qualified from the Mumbai edition at Willingdon Sports Club of the Indian swing of qualifiers was following them closely with just a one-stroke lag. Yukol Yingyongkij from Nikanti Golf Club in Thailand had the same number of points as Hassanali after round one and found himself in the thick of things at forth.

An informal meet-n-greet followed the competitive golf in the afternoon at the Jumeirah Golf Estates clubhouse. The intimate affair presented the amateurs with an opportunity to get to know each other and build new friendships and business relations.

Round two at the Emirates Golf Course- Majlis

After facing an uphill battle on the first day to tame the challenging venue of DP World Tour Championship, season-ending tourney on the European Tour, the golfers moved to the venue of Dubai Desert Classic in the heart of the city. Owing to the course maintenance in the buildup to the Desert Classic in January next year, the amateurs were asked to ditch their carts and walk the course – a true ‘feel like a pro’ experience.

The third position went to Susan Drummond who carded a two-day total of 70 Stableford points.

“I am thrilled to have won today. I’d be lying if I say that I didn’t come here to win. I guess, all of us did. Apart from first-rate golf experience at two of the world-class golf courses, it was a rich cultural experience meeting and knowing so many like-minded friends from various part of the world. I will cherish this memory for a long time.”, said an elated Yingyongkij.

A special note of thanks to our sponsors and partners, OMA Emirates, Callaway, bizgolf, Chase54, African+Eastern, CNBC, Club Mahindra, Indigo, The New Indian Express, Holiday Inn, Pepsi, Bond, Direct, Mimecast, GBM, Toshiba, Sophos, Veeam, and Pure Storage for their continued support and patronage for the event. A big shout out to the management at Jumeirah Golf Estates and Emirates Golf Club for a seamless execution of the competition.

GEC Open made its debut in 2014 with just one golf round in Dubai. In 2015 and 2016, the event grew in popularity and was played in six and eight countries respectively connecting over 1100 corporates in the GEC ecosystem. Since then, GEC Open has matured into a global platform for networking, forging everlasting friendships and business relations. The 2017 edition is scheduled to hold 29 golf rounds in 18 countries engaging over 2400 corporate leaders under the aegis of 800+ global organisations!

GEC Open, in association with the OMA Emirates, breathed a new wave of change in which this elite sport was played. With a lot of downtime to talk and accessibility for all ages, it’s a unique blend of sports and networking. GEC brings together leading global organisations and executives on a common platform through golf. GEC works to improve the lives of others through charitable causes while growing the bond & strength of business between corporate leaders.